NaaN- every ones favorite starter(Both egg based and Eggless)

on December 25, 2011
Naan is a Flat bread, Originally, naan is a generic term for various flat breads from different parts of the world. In many of the restaurants in India it is served as a starter. Generally 1 or 2 naans will fill your stomach, the size of the naans are that big. Also these naans come in various flavors very famous naan variety is garlic naan. I remember ordering this every time when I have been to a restaurant in India. The best vegetarian combination is Panner butter masala and Garlic naan. And for the Non vegetarians Chicken tikka masala and onion naan is the best combo.  In Turkic languages, such as Uzbek, Kazakh and Uyghur, the flat breads are known as nan. The name stems from (New) Persian, a generic word for bread. In Burmese, flat breads are known as nan bya(Source Wikipedia). Preparation of naan is not an easy task, it takes about 2-3hrs.
﻿
Ingredients (Recipe for Eggless naan's)
All purpose flour(Maida)-2cups
Yogurt-1 cup
water-30ml
Dry active yeast-2tbsp
Salt to taste
Sugar 1tbsp
oil-3tbsp
Ingredients (Recipe for Egg based naan's)
All purpose flour(Maida)-2cups
Egg-1
water-30ml
Dry active yeast-2tbsp
Salt to taste
Sugar 1tbsp
oil-2tbsp

Method:
Take warm water and add dry active yeast and sugar. Keep it aside for 10min until it starts foaming. Take a large mixing bowl and add all purpose flour, salt and mix well.  When the yeast moisture is ready, if you are using yogurt/Curd beat it well, if you are adding egg beat well. Add yeast mixture and yogurt/egg mixture to the flour along with oil and mix well. Cover the batter with wet cloth and keep it aside in the warm place for about 1 or 2 hrs until it rises double in volume. When the dough is ready, take the dry flour in your hands and sprinkle on the dough, separate the dough in to 8 equal parts and place them in a plate and allow it to raise for 15min again. Roll each doughlet in to oval shape, by sprinkling the dry flour if required.

I just used the tava/Skillet for cooking them, when i made them in the conventional oven they turned crispy like biscuits, so I sincerely request you not to try in the oven if you follow the same steps as mentioned above. Heat the skillet and place naan on it and cook under medium flame for 1min and when it starts fluffing up turn it to the other side and cook on the other side too!!!, when you see brown color spots on the naan then your naan is ready to serve, you can serve it by just smearing the butter on top!!! If you follow the same steps, you will get the fluffy and soft naan's.

If you want to make a garlic naan, just sprinkle some grated garlic on the top and press it while making the oval shape with dough let. If you are making onion naan, chop the onions into very fine pieces and sprinkle them on the top of the dough when you make into oval shape. Then fold the dough just as if you fold a hand kerchief and roll it again in to oval shape and cook it!!

Hope you like my recipe!!! Please leave your valuable comments before leaving!!!
@your service always,
DD 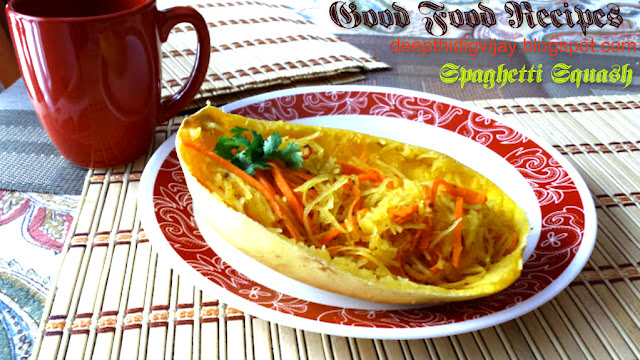 Being a worried Mom of 16 months old, who is not a big eater, makes me try different varieties. I do not know, how you can relate to me, but surprisingly most of my friends do not have this difficulty. My baby just few days back started taking cow milk, and 'touch wood' she continues it. I have been trying different recipes and the one she liked the most is broccoli-potato-carrot soup.  I will share the recipe soon. I just tried this spaghetti squash today, and she seemed to like it. Here is the recipe You will need Spaghetti squash-1 Carrot medium size-1 Salt to taste Brown sugar 1tbsp Butter/cooking oil-2tbsp Method Pre heat the oven to 350F. Make some slits on squash here and there. Pop it in the oven for 1hr. After an hour check if it has cooked properly by inserting a knife into it, if the knife moves in smoothly with little resistance, that is when you know it is ready. Let it cool down, meanwhile heat oil in a pan and saute noodled/julienned 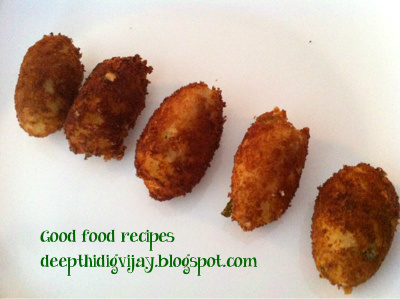 Paneer is the magic ingredient which does not have any special taste on itself, but when prepared in combination with any vegetable it is a king in the recipe. For example, palak paneer the entire recipe is rich in palak but still it is worthless without the chunks of paneer. This is one of those wonderful recipe that I tried when my taste buds kept telling me try something different. Potato is also one of the magical ingredient especially for snacking, I tried every recipe with potato (Aloo, Alugadda)  potato omlette , potato paniyarum ,   bhajji's , bonda's , cutlet , samosa , pin wheels and curry puff's . Potato and paneer (Indian Cheese), are the best combination I tasted so far. Here is the wonderful recipe, I bet you will love it! Ingredients: Makes 10 tot's and takes 30 min to cook. For making tot's Potato boiled and mashed-2 large Paneer- 100 grams Crumbled with hand oil- enough for deep fry Green chili coarsely ground-1/2tbsp salt 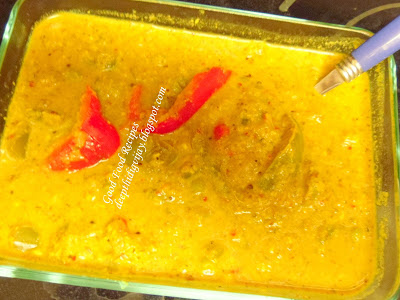